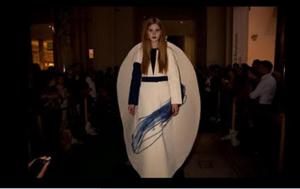 I was honoured to participate in the Yohji Yamamoto stylist battle at the Victoria and Albert Museum the other day hosted by Polona Anders and Ligaya Salazar. The other stylists competing were Paul Joyce and Hope von Joel. We were asked to recreate a Yohji look vs a look of one of the female designers he has been competing against throughout his career. My first look featured a designer that I admire for her art like work – Liz Black, the dress I choose was a masterpiece that already attracted a lot of attention on the way to the V&A – the sculpture and feel of the piece had a comme des garcon feel about it.

The Victoria and Albert Museum

After a day of shooting, we headed down to the Friday Lates at the V&A to join in the celebration of Yohji Yamamoto’s world and check out the Yohji v Fashion History Stylist Battle.  One of the Snappylifestyle rabbits and stylist extraordinaire, aka Claudia Behnke was showing off her mad skills to the audience live.  With 4 stylist battles, 15 minutes each, one represents the ‘Yohji’ aesthetic, the other one of the female designers he always ‘battles’…Chanel, Vivienne Westwood, Stella McCartney, Comme des Garcons, Schiaparelli and Balenciaga.  Claudia worked her magic, won the public vote, but unfortunately not the judges vote. No matter what though, she is always a winner with us.  You will get them next time tiger! Grrrrrr.

You are currently reading LIZ BLACK PARTICIPATES IN YOHJI YAMAMOTO STYLIST BATTLE AT THE VICTORIA AND ALBERT MUSEUM at .